The Court of Appeal of Brussels is in a state of shock! In first instance, the court had condemned most of the leaders of the OKC sect (Ogyen Kunzang Choling) and, in particular, the guru Robert Spatz – currently 74 years old – who had been sentenced to 4 years imprisonment. In this case, charges of paedophilia, rape of adult women, kidnapping of dozens of children, hostage-taking, shameless exploitation of the often voluntary labour force, criminal organization, money laundering, tax evasion, swindles, forgery in a mess…

Since Tuesday, everything is in the water! And God knows if the public prosecutor’s office will go to the Supreme Court…

In the eyes of the court, this technical acquittal is unavoidable, due to slippage on the part of the financial expert appointed by the examining magistrate, missions without a warrant on the part of the substitute prosecutor at the origin of the proceedings, and again an unfair trial before the first judge. The three magistrates pointed to the irrelevant comments made by the judicial expert, who must be impartial and independent. There had been a confusion of roles, since the expert spoke of offences committed by defendants, noted offences and commented on the work of investigators, magistrates and even journalists!

He observes extortion and makes clear statements on the guilt of accused persons whom he convicts before trial! The court deplored the fact that this expert had started from a starting assumption, namely that he was going to examine the file of guilty parties. Robert Spatz is in particular designated as the occult director of certain commercial companies or ASBLs. There was therefore no presumption of innocence but a presumption of guilt.

Searches without a warrant

The Deputy King’s Prosecutor has also been at the mercy of the authorities, since he had searches carried out without a warrant from the investigating judge, in the context of an investigation initiated by the public prosecutor’s office and relating to the same facts as those before the investigating magistrate.

Noting again that part of the file was available on the net, the Court of Appeal censured the judgement of the criminal court, which did not give the defendants a fair trial. The three magistrates pointed out that the first judge did not accept that the defence put questions to witnesses and refused the defence the right to call other witnesses! And that’s why your daughter is mute…

In a nutshell, the faults raised have caused irreparable harm to the entire proceedings and the whole file is collapsing. And there will never be a way to get it back.

An investigation that began in 1997 with spectacular police assaults in Brussels and the south of France. Twenty-one years of judicial meanderings for a case that seemed as criminal as it was sprawling. The most ferocious pages of the indictment were aimed at the kidnapping and hostage-taking of numerous children sequestered from the age of 4 in Castellane, in the south of France, on the private property of the boss.

Worse still, this Ixellois, born in 1944, allegedly abused two minors, raped an adult woman with physical torture and violently molested a fourth victim. In a more conventional register in the sect department, but which remains no less savage, there is reportedly widespread recourse to volunteers, exploited of their own free will in conditions of semi-slavery. This was, in any case, the conviction of the Brussels Public Prosecutor’s Office, which targeted a period of offence from 1975 to 2008! Robert Spatz started out as a modest TV repairman, an admirer of Johnny Smet who could barely afford a Johnny Hallyday concert that he liked to imitate often, with his own means.

Then, travelling helped him to see clearer and bigger too. Let us even say that he was seized by the supreme enlightenment in discovering the wisdom of the great master, the Dalai Lama, and of Tibetan monks in general. This gave him plenty of ideas to instruct the masses about the meaning of life and well-being in his body and mind. His bio-vegetarian shops and restaurants well known to the people of Brussels, La Tsampa among others, were born in the early 1970s in the commune of his childhood, Ixelles.

After his arrest in 1997, Spatz had clandestinely settled in Aiseau-Presles with his relatives. And, according to the public prosecutor’s office, there were still rapes committed against a minor. Of all these accusations, only dust remains today. 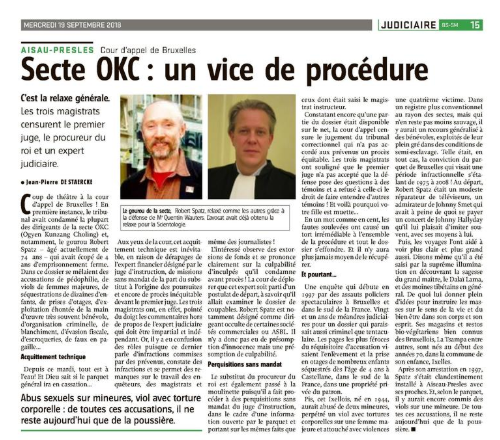